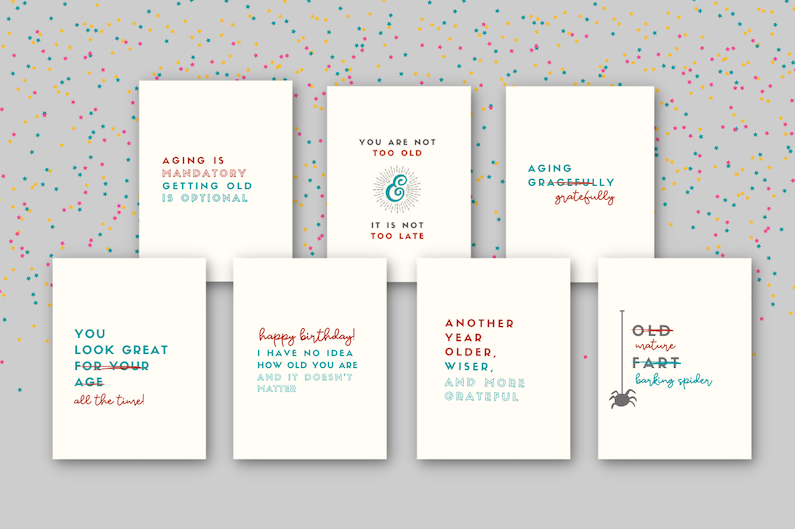 (Editor’s note: September is the month with the most birthdays, In honor of this, we wanted to remind you that birthdays are a great time to reframe aging and share this guest blog from one of our volunteers and the creator of her own line of anti-ageist cards.)

Have you ever found yourself running 15 minutes late to a birthday party, desperate to find the nearest grocery store or pharmacy so you can run in and grab a birthday card?

Standing in front of the card rack, you scan cards implying that after the age of sweet 16, freedom of 21, we’re all suddenly over the hill and crashing into mental and physical decline. Or worse yet, you’re looking at cartoon-like visuals of sagging body parts paired with clever sentiments about how awful it is to be old.

These types of cards are ageist, and they contribute to the negative stereotypes associated with getting older.

It’s all in good fun.

But it’s not fun. We need to stop buying ageist birthday cards.

The message conveyed in a birthday card does matter. It’s a personal exchange of a sentiment from one person to another, making it powerful. Stop and think before you convey an ageist sentiment to your loved one–on their birthday.

Be part of the solution.

There are plenty of ageist birthday cards available for purchase, especially as an impulse buy. It will take awareness of the harmful effects of ageism and multiple seasonal cycles to reduce the number of ageist cards on the greeting card rack significantly. 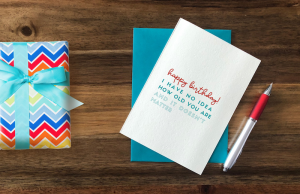 In the meantime, the next time you find yourself staring at a rack of cards running 15 minutes late to the party, look for an artsy, clever, or better yet, inspirational birthday card. If you care enough to give someone a birthday card, then care enough not to hurt their feelings by choosing an ageist birthday card.

Are you coming up empty? Choose a simple birthday card and if you must be snarky, write it (if you dare) in your own words on the inside of the card. Don’t give the greeting card company another sale of an ageist birthday card.

Jan Golden is a Change AGEnt for Changing the Narrative, as well as the creator of Age-friendly Vibes, a resource for age-friendly products. Visit Jan’s Etsy shop, Age-Friendly Vibes for a robust collection of anti-ageist birthday cards.

Check out Changing the Narrative’s age-friendly birthday campaign and their cards, produced by Colorado artists.