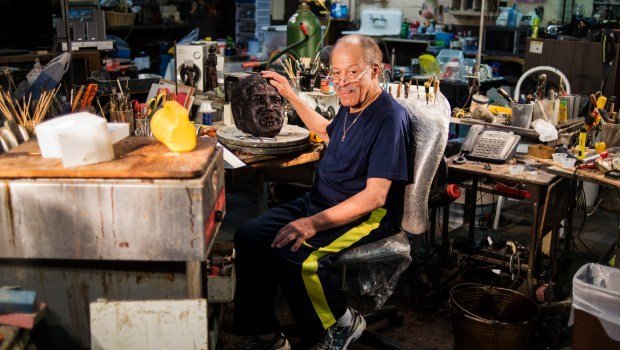 Denver resident Ed Dwight is what you would call a renaissance man. A phenom! At 87 years old, he is actively working and has worked for more than seven decades across varied careers—achieving remarkable success at every turn.

Born during the height of the depression and raised just outside of Kansas City, Dwight lived with his mother, father, and sister on the family farm, located within walking distance of an Army airport base. He was always curious about the pilots coming and going to and from the base, so he hung out in the maintenance shop and helped clean the planes as a kid. He also spent a lot of time with his grandfather. They would ride around town together, looking for different “junk” that they could create something out of. “My mechanical skills were starting to develop at a young age from being around all of this stuff,” he says. Although he didn’t know it at the time, these two early pastimes would significantly impact his life pathway later on.

A pioneer in many ways

In 1948, Dwight and his sister made history when they integrated Bishop Ward High School in Kansas City. Being the first to integrate a school is incredibly difficult, but Dwight faced the challenge with a mentality his mother instilled in him, ‘that he was just as good as anybody else.’ At school, Dwight was heavily involved in both sports and art. “I studied renaissance art in school at the library,” Dwight says. “After that, I started working on renaissance paintings that I had seen in these books. My senior year, I won three first-place ribbons in the Kansas State Art Contest.” 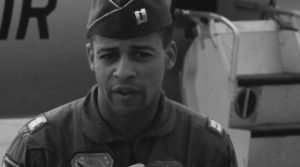 Ed Dwight in the Air Force

When he wasn’t checking out art books, he was checking out Air Force training books and studying them in his spare time. This became especially handy when Dwight decided to go into the Air Force. Upon graduation from high school, Dwight’s dad pushed him to go into engineering, and while Dwight was more interested in art, he went back to the library. There, he discovered Architectural Engineering, to which he changed his college major. Still, as fate would have it, Dwight saw a Black pilot in the paper while making extra cash as a paperboy and, feeling a sense of beckoning, applied for the Air Force. He was denied because he was Black but wrote to the Pentagon about it, and for that reason, he was selected as one out of 33 to be sent to Denver to take the admission test. Of those 33, Dwight was the only one to pass, thanks to his hobby of checking out and vigorously studying Air Force training books from the library.

During his time in the Air Force, Ed Dwight was an instructor pilot and a combat pilot in Korea. Through his success in the Air Force, Dwight was offered an opportunity to join the Astronaut Corps under President John F. Kennedy. He accepted this honor, and through the role, gave hundreds of speeches to young people across the country.

After Kennedy’s death, his sponsorship was no longer being honored, and Ed Dwight decided to leave the military after new powers tried to push him out. After, Dwight applied to 32 jobs in his field and was rejected by each one—essentially blackballed from the space industry. That is when he decided to apply to IBM, where he was hired and worked in recruitment, medical, and government education. After two years of dealing with internal barriers that blocked African American success at IBM, Dwight left to pursue another love of his and fill what he saw as an unmet need in Denver: good barbecue, like the kind he grew up eating in Kansas City!

Having grown up in a family restaurant encouraged Dwight to take his shot at opening up his own. Being an overachiever, it wasn’t long before he had a franchise with five storefronts throughout Colorado. “The Ribcage” restaurants were very popular and well-visited. Patrons especially liked Dwight’s custom barbecue sauce recipe. But, a new professional interest once again beckoned. While attending a party, Dwight met the most prominent land developer in Denver, who offered him an opportunity in construction. Dwight opened Dwight Developer Associates, through which he built numerous buildings all over Colorado. Working in construction not only allowed Dwight to thrive financially, but it was also the vehicle that drove him toward his earliest and highest calling: art.

Dwight had been collecting leftover metal from his construction s 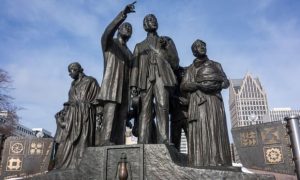 ites and taking it back home to make sculptures. “I taught myself how to weld; it was all abstract art,” he says. His art was so appreciated that the Lieutenant Governor, George Brown, requested that he create a sculpture of him for the Capitol building, even though Dwight was just an amateur at the time. After much back and forth, Dwight took him up on this offer.

After completing Brown’s sculpture, Dwight went back to school, enrolling himself in the Master’s Program for Art at the University of Denver. Dwight was there for three years

and even ran the sculpture department for a little when George again gave him a big project for the State of Colorado. It was called the Black Frontier Spirit American West. The National Park Service adopted him, allowing him to travel throughout the country for five years with the program. The Park Service got Dwight into doing large-scale memorials. Today he is a world-renowned sculptor, contributing some 140 pieces, including the bronze sculpture of the Obamas, the Statue of Martin Luther King in Denver’s City Park, and the Texas African American History Memorial in Austin. 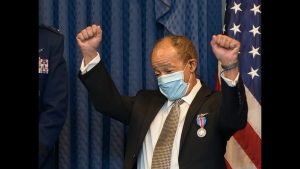 While Dwight loves what he does now, he says he will need to slow down “soon.” He works with many younger artists (some who are in their 60s). With 40 years in the art industry, he would love young artists to know that creativity is only 50% of the work. “What I do before I take on anything is that I study everything I can. It’s the research. Once you get the research, you have so many little pieces of unknown information that you want people to know. When you figure all these little details out, you can’t wait to tell the story.” He also encourages artists to be as serious about the financial aspects of the business as they are the art.

If you want to learn more about Ed Dwight’s incredible life journey, you can get his autobiography, “Soaring on the Wings of A Dream: The Untold Story of America’s First Black Astronaut Candidate,” available on Amazon.