Valerie Wood-Gaiger: a woman on a mission 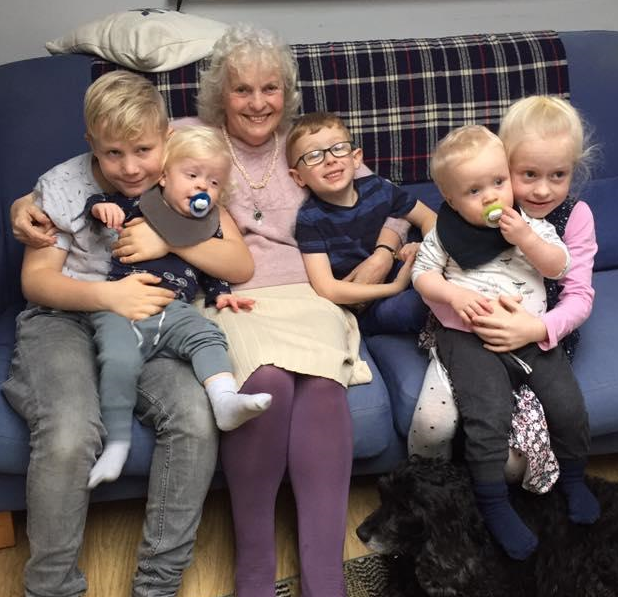 Mrs. Valerie Wood-Gaiger MBE is a woman of action and passion. Wood-Gaiger, who goes by Val, founded a not-for-profit promoting intergenerational education, and become an international speaker – all after “retiring” for the second time. Learn with Grandma encourages intergenerational learning and active aging.

Val developed her ideas about using the power of social media to promote her ideas after she experienced it firsthand. In 2008, she entered a competition that involved creating a video and trying to get the most votes from viewers. Her son helped by sending a group mailing to his email list and to her smaller contact list. Her grandson put it on Facebook.

The organizers were not looking for an older winner but Val got votes – in 2 days – from around the world, from Australia to USA and from Ukraine to South Africa. She won the vote through using technology and the organizers decided to have two winners, an older and a younger.

Val had seen the power of social media to communicate widely across the generations and across the world. She saw new possibilities to promote Learn With Grandma.

Val is a determined explorer of the possibilities. “You never know where things will go but if ‘God opens a door, He means us to go through’!  While in Paris to speak at a conference about older people, Val was thinking about different ways of using technology to reunite the generations and had a lightbulb moment: She was in Paris and UNESCO has head office is in Paris! A passer-by gave her directions and, without an appointment, Val just walked in and asked to speak to “someone” in IT in Education.

The receptionist seemed surprised, but was found someone to speak with Val. He turned out to be head of the department! He loved her ideas and asked her to give a presentation at the next UNESCO educational conference.

Learn With Grandma has now grown into an international network with Facebook groups all over the world; exchanging ideas between generations and cultures. “The main aim is to share ideas of how to use the internet as a bridge to reunite the generations and help break down the digital age gap by sharing skills, love & knowledge across the generations.”

Learn With Grandma promotes technology in education and the exchange of ideas and skills through technology. Val gives examples of community gardens, sewing enterprises, soap making and well digging – skills that people were able to share across distances and generations because of communication technology.

Val inspires and connects people. “My mission is to inspire people to take action!” she states with her usual directness. ICT (information & communications technology) clubs in Uganda are one example.

Val met Wamanga Moses, an IT teacher in Uganda, at an e-learning conference in Tanzania. “He’s a person who when you give him an idea, he will run with it,” remembers Val. Two tears later a similar conference was held in Uganda.

In the meantime Val had had a triple bypass followed by a cardiac arrest but realized that a) she HAD to go to the conference b) most any teachers could not afford to attend the big international conference. She suggested a post-conference seminar to share what they’d learned with teachers throughout Uganda.

Moses made it work. He send invitations all over Uganda and 293 Ugandan head teachers came; even the national head of education attended. It was so successful that the teachers decided to continue holding annual conferences.

Moses founded KAWA, a nonprofit focused on IT education, and established ICT clubs, where students can learn technology from each other. He has now been tasked by the Ugandan Ministry of Education to open ICT clubs throughout the country. Val says, “This works and is proved. Gradually Moses and I will share this concept to other countries – easy now with Zoom! When the pandemic is history, those students will strengthen their learning by becoming teachers to older people.”

“In life, you have to keep moving.”

Val’s doctor advised against the trip to Uganda but her near-death experience made her realize that “I had to go! God had opened the door He expected me to go through. He even provided the funds!”  Val was just chatting to a member of her church, telling him exactly why she needed to go and he paid for her flight.
Val notes that she is dyslexic and has what she calls an “eclectic mind”. But, what makes her truly different is her boundless curiosity and, most of all, that she takes action. Val also refuses to be be categorized by her age. “People sometimes ask  ‘should you be doing that at your age?’, but I think that age should not be the thing that defines you. Getting older is good – the alternative is dying young! Growing up is an option I have decided not to take. Until the pandemic, I was having a lot of fun!”
Val also points out that “I’m not a problem; I’m a resource!” And, she’s not the only one who realizes this, as evidenced by her numerous speaking engagements and accolades. Most recently she received a global Women of Heart Award. She responded on Facebook, “Wow, I have been given a Lifetime Achievement Award!! I hope they realise that I’m not done yet!”

Read about more what real aging is like on our blog and join the movement to end ageism!