Knocking stereotypes out of the park: the Colorado Peaches 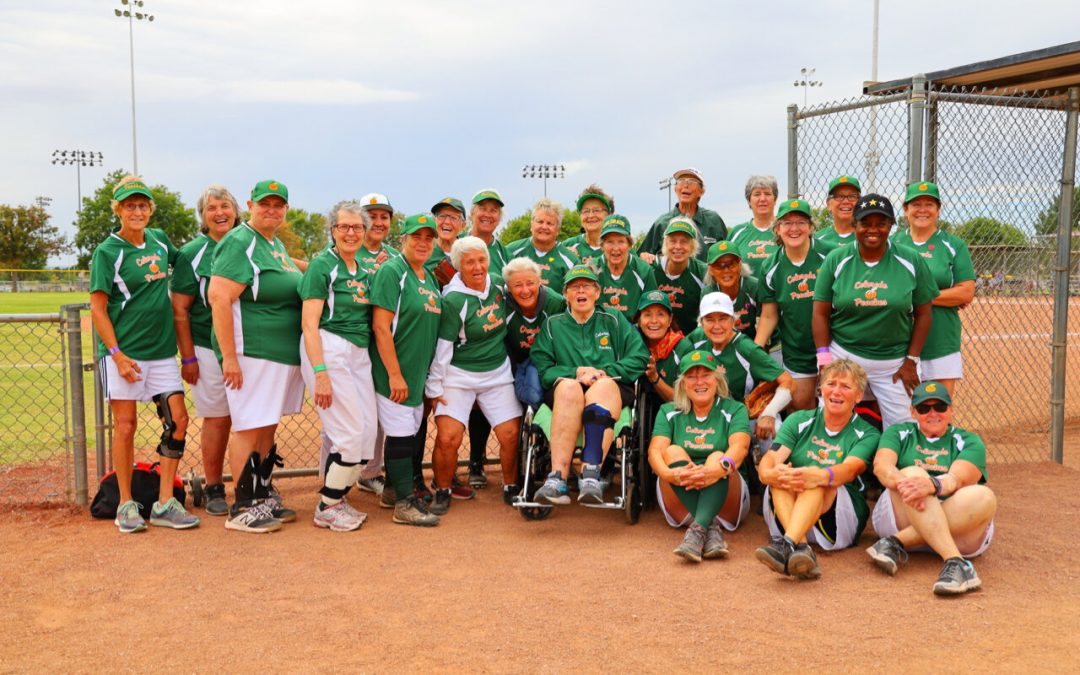 Team sports have the capacity to bring out the best in us. It turns out that this is true no matter your age. If you have any doubts, you need to meet the Colorado Peaches.

The Colorado Peaches Senior Women’s Softball Club was founded in 1991. Along the way, they’ve won national medals and championships and grown to five teams, age 50 to 90+. While the wins are impressive, what’s more impressive is how they do it.

Dedication to the game

Fran Simon, one of their younger players at 51, describes her teammates as “incredible”. “The women are always trying to improve. You can see that they are getting better and better.”

After a lifetime of sports, Fran, nearing 50, was playing fast pitch softball. At a Sportswomen of Colorado fundraiser, she noticed a group of older women in uniform, with medals around their necks. They were members of the Colorado Peaches. It was worth investigating.

“I’d been thinking about hanging up my cleats,” Fran remembers. Then she started hanging out with the Peaches. “I didn’t know what to expect when I eventually started playing with them. I was just so impressed that these people were out there. The women love to play and they love to compete. We have a lot of fun and there’s a lot of laughing, but it is also serious. And, everyone can continue to improve and get something out of playing.”

Rosie Melichar, at 81, has been on the team since 2003. “I’d decided that I wanted to buy a house by a park and shoot baskets. I went to the Aurora Senior Center and asked them what sports they have for older adults.” She started with a women’s traveling basketball team, co-ed softball and then went to the Colorado Peaches. Despite injuries and multiple surgeries, she keeps adjusting and playing, year after year.

Maggie McCloskey, another long-time member, is still playing as she approaches 90. She started on the team in 2007. “When the team first started, the players were not as old on average as they are now. Then, after playing for years, in 2012, half of them quit. They were 80 and thought they were too old.” Maggie and a few others kept them together until they could find a coach. “There was no way I was going to let the team dissolve.”

The team continued to go to tournaments and practice, as they worked to recruit more players. They were dedicated to their game and loving it, but, without a coach, didn’t do well at the tournaments.

Then they found Gail Klock, a lifetime athlete and coach of high school and college sports. One throughline in Gail’s career is the idea of providing opportunity. “I have always loved working with people who have not had an opportunity and then providing it for them.”

Like many of the Peaches, Gail experienced the limitations put on female athletes when she was young. “All of sudden, in 7th grade, they told me I couldn’t go past half court in basketball. People had all kinds of weird ideas about sports and running for women. It caused me a lot of internal conflict. There must be something wrong with me if I can do this and it is supposed to hurt women.”

Gail knows the difference opportunity can make. One of her high school coaching jobs was in a lower-income area. The kids had never had the chance to play organized sports. “They were the best people to coach because they were grateful for my support and did not take the opportunity for granted.”

“I would much rather coach these older women than many college players. These players (the Peaches) believe they can learn and that they have things to learn. You know, the best professional athletes are out there practicing and willing to take in anything they can get. These women are just so eager to learn and to have someone who believes in them and pushes them.”

Gail is also a leader by example. She’s coached through surgery and cancer, including coaching the Peaches from a hospital bed. She’s coached through any troubles she’s faced. “No matter how hard their lives are, the players can see from your example that you can still go on. Knowing this makes you not just better as an athlete, but as a person.”

Much more than exercise

Gail helped turn the Peaches around. “She was able to see where our particular talents and handicaps were,” describes Maggie. “She believed in us. It was amazing because we got better and better. Even now, when I go to practice, I’m honing and tweaking and getting better.” By 2017, the club had 25 people.

Gail makes sure everyone plays. “I want to win as much as anyone else, but I will not sacrifice people for the win. Doesn’t matter if you are going to be the best player. You need a person who cares about you as a person first.”

The Colorado Peaches are about more than staying active. “Being part of the Peaches is being part a fellowship group,” describes Rosie. “No competition against one another. We are supporting one another. That’s what being part of a team is about.” Rosie emphasizes that “my Christian faith is the biggest part of my life” and she also likes to tell people about the Peaches, striking up conversations in a store or restaurant.

Maggie describes the team’s culture with a story. During a practice, the players saw an older woman walk by the fields who looked like she was trying to get some exercise. The Peaches called her onto the field and someone found her a glove. She’d never played sports before, but it was quickly clear that there was an athlete inside her.

The issue isn’t ability or experience, but how people work as part of a team. “People feel like they really belong,” Maggie adds, and “we have agreements about being on time. It’s about having discipline, even though we are also having a blast. We pride ourselves on our culture. Everyone is valued, regardless of age and ability, creed, ethnicity, sexual orientation or anything else.”

You are never too old

During the pandemic, the team put in strong protocols about wearing masks and distancing, but managed to practice last summer. When tournaments were cancelled, they created their own tournament with five mixed-age teams.

“In terms of desire, wanting to learn more, having ability to improve with good coaching, these athletes and younger athletes are the same,” says Gail. “You wouldn’t think that this would be possible in your 70s and 80s, but it is. People think that if we get old, we are not of value. Because of that, we can shut down. I don’t think that this is true. It is much less true if people are given opportunities.”

According to Maggie, people need to stop thinking they are too old to play or get better at something. “That thinking comes from outside of us. I think of aging as another, a whole other, place in life. That word “senior” is static, like an end place, and beyond that is more, if I can just see myself beyond that.” She thinks of her current stage of life as a time to be “harvesting your life, really looking at what is that within each of us, why did we come here and what is it that we harvest now and leave behind us?” And with all that, there is always room to grow, as Maggie’s dedication to softball and her team shows.

The Colorado Peaches club is more than what you see at first glance. Yes, it’s good exercise, but it’s also fellowship and personal growth. We all need to have fun and we need to keep challenged, at any age. Getting older is no reason to stop finding a way to play.

Editor’s note, March 2021:
We’d like to share the extremely sad news that Gail has passed away. We feel lucky to have had the chance to share some of her story. Her message to her team included words that will inspire for years to come, just as she inspired so many during her life: “Continue to be the welcoming group you have always been for new players. Always remember it’s the spirit of the game that keeps us there and it’s the underlying theme of play. No matter how old you are, you can, and should, always love playing.”