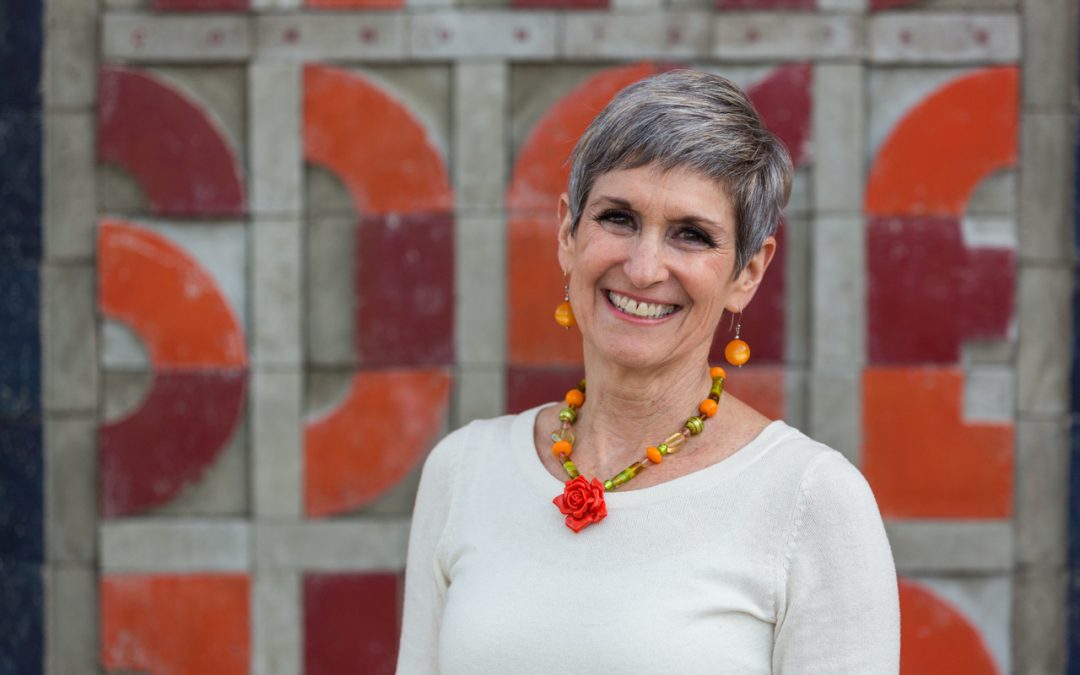 Life doesn’t stop at a certain age. Older adults are still growing and learning, despite how they are often portrayed. This comes up every time we interview older adults.

Amy Siegel is a prime example. Amy spent most of her career in graphic design in a corporate setting. Some of her biggest contributions to the field are in environmental design, a crucial tool most of us probably haven’t noticed. Environmental Graphic Design (EGD) embraces many design disciplines, all concerned with the visual aspects of wayfinding, communicating  information, and creating experiences that connect people to place.

Amy specialized in airports. She traveled the world creating the design elements that help us navigate through airports efficiently. Her achievements in this, and other aspects of design, were recognized by the American Institute of Graphic Design when she received the 2017 AIGA Fellow Award.

After decades in a rewarding career, Amy began to notice changes in how she was perceived by some. Some colleagues assumed that she wouldn’t be around for longer-term projects. It became more difficult to get professional development opportunities. People were making age-based assumptions, instead of considering her actual abilities and intentions. Amy felt it was time to pursue another lifelong goal – working for a non-profit – and the time seemed ripe for a change.

When one door closes, you go knocking

At first, she wasn’t sure how this would happen, but Amy is resourceful. “I’m always willing to continue to learn and change. The world is always changing.” When graphic design moved from drawing by hand to computers in the 90s, she was quick to learn the new technology. She adapted to the challenges of raising two children as a single mother. Way before it was as common, she found contract and flexible work. “And, I’m a good saver,” she adds. From both her work and life experience, she knows how to adapt, find creative solutions, and keep a project going.

Amy has built relationships and followed her passions throughout her life. She’s been volunteering for causes since she was 16. She sees a huge value in relationships and keeping up friendships with people of all ages. “I have a regular date to go for a walk with one of my former colleagues, who is 28. I don’t consider age to be a factor in being a friend or colleague.”

It was her volunteering that led her to where she is now, the Director of Marketing, Sales & Design for Access Gallery. Amy was introduced to Access Gallery in 2005 through Giving Voice, a program that pairs a professional graphic designer with a teenager with a disability for a summer internship. Amy served on Access Gallery’s board for over six years. Around the time she was was ready to make a career change, the gallery got a grant to hire someone in her current role.

She approached Damon McLeese, the gallery’s director, and she was hired. “She is amazing,” says Damon. “And I couldn’t be happier to have her. It was the right choice.” Amy feels the same. The gallery even supported her request for professional development. “I feel valued for my experience and age isn’t a factor.” Age-based bias doesn’t make sense. “I’ve got plenty of years and just as much energy, so I find that kind of attitude very frustrating.”

As we accumulate experience and wisdom, we often become teachers and leaders, whether it’s directly or by example. Another part of what Amy Siegel brings to her job are the leadership and soft skills that make projects and teams successful.

Amy’s experience brings advantages to an intergenerational team. “Someone with years has had the opportunity to learn. I’ve also had plenty of time to make mistakes. I tell people that I do it this way because I really screwed something up once.” This is particularly valuable for a small nonprofit, where getting things right the first time means saving time and money. Amy also brings a fresh perspective, coming from another industry. 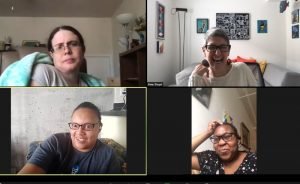 Art goes on during the pandemic: A virtual Graphic Design class with Amy (top right) and Allie, Brittany and Jocelyn (counter-clockwise from top left).

Amy’s role at the gallery is actually two-fold. Along with the grant for marketing and design, there is a second grant for an artist mentor. Amy can do both, another way that her life experience has brought value to her employer.

Amy speaks proudly of Brittany, one artist that she mentored. “My role as mentor was to help Brittany bring her art to the next level. Brittany creates art with beads and had been making smaller pieces. After we worked together, she did a beadwork portrait of Frida Kahlo. Brittany sold every piece she put in the gallery’s 10 Pin Show in March. Her Frida piece sold for $1,200.”

Amy Siegel’s background –  as a corporate professional, artist, award-winning designer, project manager, single mother, world traveler – adds up to more than the sum of its parts. Ageism may have prevented some from seeing that. Fortunately, her new role is a testament to Amy’s resilience and to the open-mindedness of employers like Access Gallery.

Read about more what real aging is like on our blog.