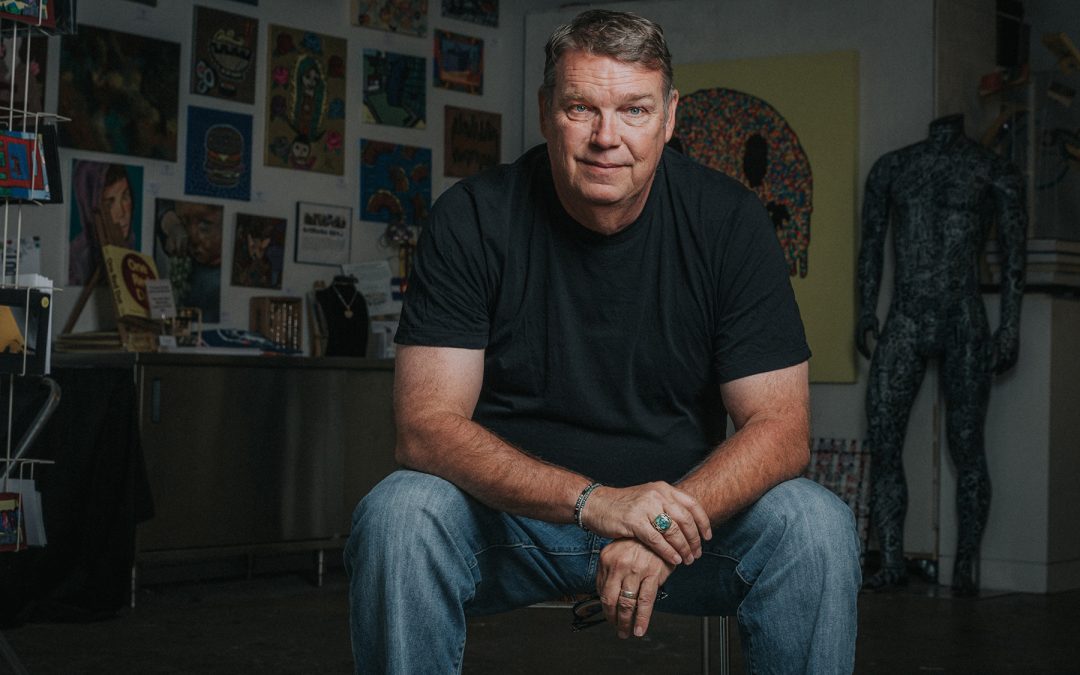 Damon McLeese has dedicated his life to shifting perceptions – about art, about creativity, and about who does these things. He has spent decades building programs that provide creative opportunities for people with physical and cognitive disabilities. Now he is also applying what he has learned about creativity to aging and challenging assumptions about getting older.

It all started with a summer job when he was 13. His mother found a volunteer role for him at a camp for kids with muscular dystrophy. Damon’s family was not well off and this was a way to keep him busy and get him to the mountains for free. The camp needed male counselors and people who could lift, and Damon was already 6’ 2”. So began the first steps on a lifelong path.

That camp was Damon’s introduction to disability. “It was a fluke thing that changed my life. In college, I would even ask to take my finals early so I could go to camp.” Eventually the camp started putting him in charge of things, and he pursued a degree in nonprofit management. He realized that his path was leadership.

For the past 20 years, Damon has been running Access Gallery, a nonprofit that provides opportunities for people with disabilities to access and benefit from the arts. As he describes in a TedX Mile High talk: “I’ve developed programs for people who are blind to take photographs, people who are deaf to dance, and people who don’t have arms to paint with their mouths. Our programs have been recognized and replicated across the country.”

Damon was named the 2019 Bonfils Stanton Foundation Honoree in Arts and Society for his work.

A few years ago, Damon’s awareness of the impact of creativity broadened when his mother was in a care home before she passed away. She was living with Alzheimer’s and had broken a hip. At the time, residents at the care home were offered children’s coloring books as an activity. Damon was currently working on a graffiti project with artists from his gallery. When he told his mom about his project, she said “I wish I could come with you. I’m so sick of doing coloring books, I could just spit.”

“It rubbed me wrong how little creative outlet people had there. I did what I typically do, which is dive in.” A seed had been planted. After his mother passed, it came to fruition and Damon put together a graffiti class for residents. It went really well and resulted in more than art. During the process, many people opened up, sharing things about themselves that their caregivers at the facility didn’t even know. The process helped people access parts of themselves not reached through usual routines.

As with much of Damon’s work, challenging assumptions about what is possible has lead to discovering that the assumptions were wrong. “An 80-year-old should have the same creative opportunities as an 8-year-old, but we have to change how we think about it. Don’t design something for your grandparents, but for a co-worker.”

Damon says that the nursing home did great job for his mom’s physical needs, but not her spiritual needs. “They did their job, but the job needs to be broadened from just the physical. It’s cheaper to train an artist than a neurosurgeon. We should be sending artists into places like that.” Older adults are like any other humans – we all have creativity and a need to express ourselves. As with the artists at Access Gallery, however, some of us may need adaptations so that we can express ourselves.

One mistake that people make, one that Damon McLeese points out frequently in his work and his speaking engagements, is conflating artistry with creativity. “Creativity is the spark to make something and leave a mark,” he explains. Everyone has this.

With his own aging and his experience with his mother, Damon is thinking more and more about creative aging. Creative aging is rediscovering – or even discovering for the first time – that each of us is truly creative. As we age, we have even more knowledge and experience to draw from and Damon thinks that age brings even more creativity.

The important thing isn’t the art itself, according to Damon, but what we learn about ourselves in the process. “I doodle all the time. It isn’t for anyone else; it’s for me. When my mom was sick, art was the one thing I had control over and I used it as part of grieving.” He’s also taken up photography in recent years, opening up more to his own creativity.

Damon now gives talks and workshops about art and creativity to a variety of groups, helping people see beyond the boundaries of a lifetime of conformity. He sees how often people surprise themselves when give a chance.

During one workshop for a group of accountants, a woman stated adamantly that she was not creative and could not do this. Participants had been instructed to make a collage using colored, round stickers. After little time (and wine), she tried anyway. At the end, she showed Damon a three-dimensional collage, where she’d pinched the stickers to get more shape. “I’d never seen anyone try that before. A couple months later, she emailed me to let me know that she’d signed up for a watercolor class.”

“You have to give people permission to try new things and learn from mistakes. We all need that. I’ve seen amazing things come from that, things that the people doing the creating did not believe until it happened.”

Damon McLeese is always thinking about new ways for people to create and adapt, including himself. One opportunity came from another life lesson, when he hurt his back a few years ago.

Damon was worried about what would happen to Access Gallery. He realized that this was a wakeup call about not having it be a “one-man band”. In response, he grew the staff and partnered with a larger organization to support administration tasks. He challenged his own assumptions. A few years earlier, his ego wouldn’t let him do that, but experience and necessity are teachers.

He has also shifted the organization’s focus away from a nonprofit to a social enterprise model, again adapting to a new understanding. He knew that people with disabilities lack economic opportunities. The gallery now is producing art for corporations, connecting artists to paying work and job experience.

“You need to use your own time in the best way. My job is to be a visionary, putting together things other people don’t see, not being an accountant.” Along with his vision, Damon brings a lifetime of relationships and a lifetime of tested, creative solutions. “For a while, I tried to do things by the book. But, the book is wrong. It’s written for nonprofits with more than a $200,000 budget.” His philosophy of creativity is part of his successful leadership, not just what he teaches others to do.

As his work and his example show, sometimes success depends on challenging your assumptions – about creativity, about aging and, really, about everything.

Read more about other people challenging assumptions and reframing aging.