What do you picture when you think about people living with memory issues? For instance, think about the word “dementia”. Do you come up with a positive picture? One of our society’s common – but inaccurate – stories about aging is that it means becoming helpless, useless, unhappy. This story is amplified when we add the idea of facing changes in how our brains work.

When we give into this fear, it is easy to push people living with these conditions into a category that is “not us”. To make matters worse, the pandemic has exposed how many people think of all older people and people living with disabilities as expendable.

Aging does not mean losing our humanity 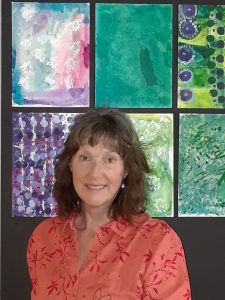 Elizabeth Stanbro would argue from her own experience against this prejudice. Elizabeth is an artist and teacher who has worked for years in art education in at-risk populations. Her philosophy is to honor the artist’s ability and promote self-reliance. (See and read more on her website www.ArtforOlderAdults.com.) She turned her focus to older adults living with memory issues, after seeing how little creative outlet her mother had while in a care home. Elizabeth trained in Opening Minds Through Art (OMA), a program created by Scripps Gerontology at Miami University.

OMA is based on the understanding that we remain creative and need to express ourselves, even when memory issues arise. Instead, when this happens, we need new and different ways to engage. Art is a way to do this when other forms of expression are not possible.

One of the core elements of OMA is choice. Elizabeth says she values this approach for “not infantilizing projects, but instead giving people sophisticated processes that produce rich, complex artworks.” One goal is to provide as much choice as possible, with a range of materials and colors at the artist’s disposal. Instructors and volunteers help artists understand how to utilize materials. Artists are not told what to make.

OMA respects individuals’ agency and this is a major reason that Elizabeth chose it. “The OMA process accesses what people with dementia have in the moment and doesn’t rely on faculties that are diminished or absent,” she explains. “It honors the individual. It helps people produce rich, layered compositions. The art reflects the individual making the creative decisions, instead of producing cookie cutter projects that come from being told what it should look like.” 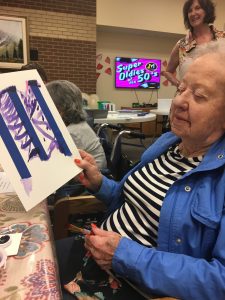 Opening Minds through Art shows that people remain creative and can express themselves uniquely, even with memory issues. Elizabeth has seen the dramatic changes the program can produce. She describes one woman who, at first, gave all her art works the same title and used similar shapes and patterns in each. After weeks into the program, she was creating different compositions, each with a different title. Over time, the woman’s work became richer and more complicated and she shifted how she related to it.

“She (the artist) was exploring more possibilities so there was definite growth, rather than repeatedly doing the same thing. This indicates a more expansive thought process inspired by this particular creative process. This also indicated she was interested in the process and felt a desire to create in a deeper way.”

Elizabeth has seen this transformation over and over again. She’s excited that she has been about to work with residents at care homes around Front Range. The list includes Life Care of Colorado Springs, Rosemark at Mayfair Park, Assisted Living on Broadway, The Manor at Marston Lake, Arvada Art Center (SPARK program) Lincoln Meadows, Think360 Arts Creative Aging Program at Senior Hub, and Denver Art Museum’s Creative Aging program.

The program is also changing people’s minds across generations about people living with memory issues. Opening Minds through Art utilizes volunteers, based on the idea that direct experience and interaction are what really change attitudes about aging and older adults. “Another reason that the OMA process is so meaningful because it cultivates connection between the artist and the volunteer supporting them.”

Elizabeth recently worked with two college students in an OMA class at a memory care facility. Both were studying in a healthcare field. Both loved OMA, and Elizabeth could see how the experience changed their ideas about the people living with dementia.

In general, the response from pre-med students to OMA has been impressive. The OMA program at Scripps also includes pre-med students and has even seen some students consider choosing gerontology as their field after experience with OMA.

Elizabeth Stanbro’s work helps people with dementia live more fully. And, she’s changing the way people understand the changes that sometimes come with aging. “People living with memory issues are valuable human beings who have much to offer all of us.” We may change with aging in a wide variety of ways, but we do not lose our worth. Programs like OMA and Elizabeth’s work are helping spread that idea across generations.

Read more about other examples of changing the way we think about aging.