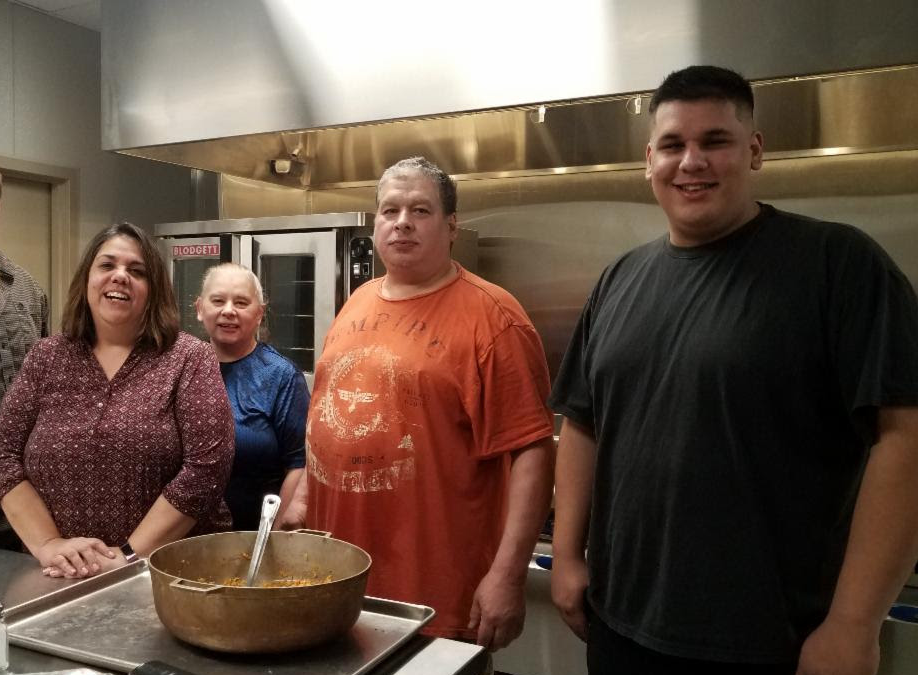 Life experience is invaluable. Add it all up and then throw in a desire to do good and great things happen. A lifetime of experience and of caring for others came together when Gil Vasquez and his family started volunteering at The Delores Project.

Gil and his family have a long history of serving their community. They look for ways to help. Gil is a long-time North Denver resident and plumber, who likes to find ways to help out. For instance, when his kids were younger, he always did a burrito stand for the school carnival and donated all the proceeds. His wife Brenda is the Manager of Volunteer Services for Denver Public Schools and, according to Gil, has been “helping nonprofits and volunteering forever”.

Gil, his wife Brenda, and their family have been volunteers at The Delores Project (TDP) since April 2010. The Delores Project is a nonprofit providing shelter and professional services for unaccompanied women and transgender individuals experiencing homelessness.

The Vasquez’s involvement began with serving food at The Delores Project. Sometimes, when Gil came to TDP to serve, there would be a shortage, so he’d throw something together from their pantry. Fortunately, before he was a plumber, Gil was a chef. It occurred to him that he could prepare something himself regularly. He wanted to serve something he’d like to eat. It took a little convincing, but Gil can be persuasive. He began cooking and serving a monthly meal at TDP, with the help of his wife, kids and later, even his sister.

On the first Thursday of each month, the Vasquez family brings the meal. Gil takes a day off to shop for food. “I am very meticulous about the quality of the food and may stop at several stores to find prime meat and the right spices,” he says. Gil usually begins preparing the food the night before it is served. He might spend three hours cutting up meat and then marinating it overnight.

He starts cooking the next day at 7:00 am. One day it might be enchiladas, beans, and rice. His menu includes things like chicken mole and pasta. While the food is simmering, he drives to Cakes by Karen, a Denver bakery, who generously donates dessert. He might load up to 20 cakes in his truck, before returning home to finish cooking. At 6:00 pm, he and his family load the truck with all the food and head to The Delores Project to serve a home-cooked meal.

Gil says that he loves being a volunteer at The Delores Project. “You see how grateful people are. They talk and joke with you. These are good people. It means so much and it becomes easier because you want to do it. It is not because you have to.” He adds that “People clap for us when they sit down.”

Gil’s been told that people look forward to his meals: “It’s the Vasquez family. I’m waiting for when you come.” Gil and his family are obviously bringing more than food; they are helping create a sense of family.

One thing Gil has learned over the years is to how to get people involved in helping, from his family and neighbors to his business contacts. He is not shy about asking for things for others in need. His relationship with Cakes by Karen in one example. He has been their plumber for many years, and he says it was easy to ask them to donate cakes each month. He’ll solicit neighbors when The Delores Project has a need. He’s worked with local restaurants to set up events to raise money for the organization.

Gil and his family really believe in the work that The Delores Project is doing. Gil points out that people have wrong ideas about the people who are at The Delores Project. He meets a huge range of people there, who are working hard and all deserve respect. TDP treats everyone like family and makes the place more like a home, giving people what they need to feel valued and move forward.

The family believes deeply in what TDP does and how well they do it. Gil’s wife Brenda now serves on the board for TDP, offering her extensive expertise in nonprofit and volunteer management.

Our communities need and rely upon the generosity, expertise and relationships built by people like Gil and Brenda, who have dedicated themselves to serving others. A strong community is built on relationships and this takes time and genuine effort. But, in the end, it these relationships and sincere effort that give us the power to make things better.

We can all make a difference, even right now. Check out these virtual volunteer opportunities.